Former Featherweight champ Jose Aldo is set to return to the octagon this December as UFC announce several additions to the planned event for December. 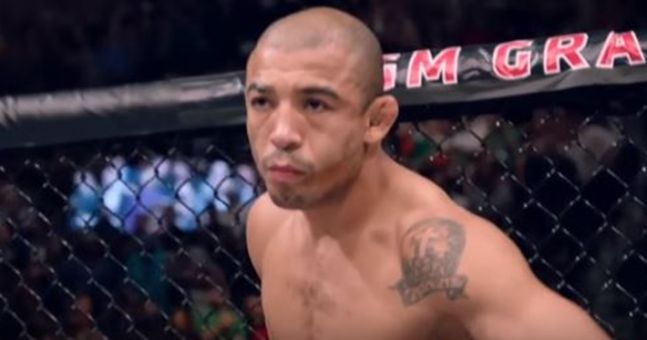 The event is slated for December 16 in Winnipeg, Manitoba, according to reports.

The fight at Bell MTS Place would see Aldo (26-3) clashing with Ricardo Lamas. Aldo last fought in June where he lost his title in the 145 division to Max Holloway. Aldo is expected to see off Lamas who would be seeking to prove a point as well.

Aldo is still one of the top rated pound for pound fighters in the sport. Before he lost his title to UFC star Conor McGregor in 2015, he went unbeaten for almost a decade. His loss to the Irishman was embarrassing as the fight lasted barely 13 seconds before he was knocked out. END_OF_DOCUMENT_TOKEN_TO_BE_REPLACED

Jose has changed his mind set about the way fights work.

For instance, way back in 2015 the fight he had with Conor McGregor saw him lose but he states that, even with that loss he gained a lot of money. It is not about being an honorable fighter anymore, but being commercial about it. One needs to be able to build hype about an upcoming fight and create a tension with the opponent in order to entice viewers who would want to watch the upcoming match. When the crowd is more, there is more money coming in for both players and hence, it does not matter much who wins or loses as the money is big, the bigger the promotion.

Aldo has also hinted at super fights like the one that he was trying to arrange with Khabib Nurmagomedov. Indeed, after the upcoming fight with Holloway he hopes to get into some super fights. END_OF_DOCUMENT_TOKEN_TO_BE_REPLACED

MMA fighter José Aldo has just recently had a clash with fellow fighter max Holloway; the two have been in a war of words over the cancellation of their proposed duel.

The UFC 208 match, which was set to go down on 11 February, has been cancelled. While unexpected, it was to be a featherweight unification fight between interim titleholder Holloway and champion José Aldo. Now that it is no longer happening, it has formed a squabble between the two fighters.

Aldo had let go of the interim designation when Conor McGregor was relinquished of his 145-pound belt after it was made known that the UFC wanted a headliner for the UFC 206. In relinquishing the title, the UFC 206 event got top billing and it was determined that the winner of the showdown between Anthony Pettis and max Holloway will be named the interim feather weight champion and would be set up to go against Aldo.

Even with the arrangements made by the UFC, McGregor has publicly refused to drop his featherweight title. Aldo was slated to meet Holloway in Brooklyn; this was after Holloway defeated Pettis at their showdown in Toronto. END_OF_DOCUMENT_TOKEN_TO_BE_REPLACED

Reward of Traditional Martial Arts – Accurate Legacy of the Ninja Gift of Conventional Martial Arts is an fascinating and considered provoking testament to the electricity of finding out “Kobudo” – the historical…
Video Ranking: 4 / 5

Quinton ‘Rampage’ Jackson maybe very happy with the new contract that the Ultimate Fighting Championship or the UFC has signed him on but according to UFC Featherweight champion Jose Aldo, he is not happy with what he gets.

Ever since Dana White, the UFC president took aim at arguably the greatest pound for pound fighter in the world, Aldo has been getting more and more vocal about the way the promotion treats its fighters, the compensation they get from the UFC. The Brazilian has repeatedly cried foul over the payments, or lack of it, made to the fighters by the UFC.

Now, the Brazilian fighter, who many see as one of the greatest fighters of all time, has taken that criticism to the next level. Speaking before a UFC Fight Night event, Scarface said in a question and answer session with the fans that it almost costs fighters like him a lot of money to fight in the biggest promotion in the world. END_OF_DOCUMENT_TOKEN_TO_BE_REPLACED